The RSC “Reading Room” contains a regularly updated electronic library of reports, documents and other research resources. The RSC collects and compiles this set of electronic material and research resources in order to provide access to a wider body of work for researchers and analysts. Most notably, the RSC “Reading Room” is a key element of our efforts in the areas of public education and research and analysis, as we construct and expand a virtual “knowledge base” of resources covering a wide range of topical issues and geographical areas, many of which are neither widely known nor available in Armenia or the South Caucasus region. 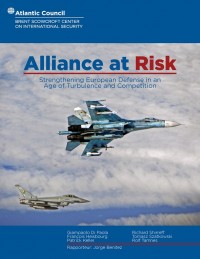 Despite Russian aggression in Ukraine and growing threats along NATO’s southern flank, many European allies find it difficult to increase their defense capabilities and meet the commitments they made at the Wales Summit. To address this important challenge, the Atlantic Council produced its Alliance at Risk report, which draws together noted experts and former senior officials to examine the vulnerabilities in European defense and provide recommendations on the way forward. The project highlights six leading nations from NATO’s north, south, east, and west, which also serves to illuminate the many perspectives and diverse defense priorities that exists within the Alliance today.

The U.S. and NATO face two primary threats to our security interests: Russian aggression and growing instability on our southern flank. Russia continues to foment security concerns in multiple locations around the EUCOM AOR. Concurrently, we deal with a variety of transnational threats that largely emanate from instability in Iraq, Syria, North Africa, and the rise of the Islamic State of Iraq and the Levant (ISIL). The U.S. and NATO must take a 360-degree approach to security – addressing the full-spectrum of security challenges from any direction and ensure we are using all elements of our nation’s power.

In an annual presentation to the U.S. Congress, U.S. intelligence officials presented their official “Worldwide Threat Assessments.” In hearings before the Armed Services Committees of the U.S. Senate and U.S. House of Representatives, Director of National Intelligence (DNI) James Clapper and the Director of the Defense Intelligence Agency (DIA) Lieutenant General Vincent R. Stewart, USMC, each presented their reports.

The geopolitical hot spots continue on the fore in the second half of the year. The Syrian war remains complex with no transition plan. The Russian-Turkey tension escalates. Iraq is still in a fragile situation. ISIS tries to destabilize failed states in some regions. The proxy war continues in Yemen. The refugee crisis poses some risks for Europe.

Riding the Electoral Roller Coaster in Turkey: How to Read the Results of the June and November 2015 Elections?

The dramatic finale of the election storm in the country came unexpectedly. We have yet to understand the details of the conservative shift that brought the AK Party to power one more time. What is more of a concern at this stage on a speculative level is the potential impact of mass security concerns on Turkish democracy. As Turkey remains in tense international conflict on its southern Syrian border, the saliency of security concerns fueled by the Kurdish conflict also provides ample ground for limitations and constraints to be imposed upon Turkish democracy. These security concerns are likely to be coupled with the waning importance of performance politics. As a rule, without performing acceptably in meeting the demands and expectations of the masses, especially on the economic front, a government could not stay in power. The last experience of the November elections, however, could be taken as evidence of electoral success without noticeable performance advantage. The AK Party’s success appears to be driven not by its performance but rather by its successful management of the changing agenda, by ontological polarisation as a basis for credibility while facing an uncertain future, and by a de facto constrained campaign effort on the part of the opposition. Such constraints upon the opposition and the media at large can only mean deteriorating democratic standards in the country.